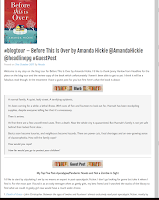 Especially for Halloween, an inappropriately zombie free list of my five favourite End Of the World novels at Short Book & Scribes.
Posted by afterzoe at 22:21

UK Blog Tour Day One. In which Karen of My Reading Corner forces me to pick only three books. Such cruelty! 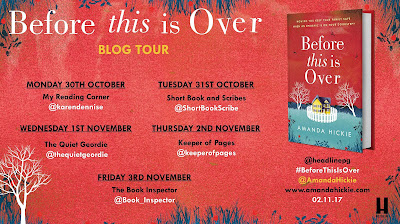 The ‘Wake in Fright’ weekend

When they were all very young my father's little sister Patricia, who he adored, married his best friend Ken Cook. They were all involved in the Sydney theatre scene and then the early years of television. Ken wrote a book called Wake in Fright, which more than fifty years later has just become a TV miniseries.

Dad's extended family used to get together at significant dates – Christmas, Easter and fireworks night. I remember being very small, visiting my cousins one Christmas and hiding from uncle Ken behind my mum's legs. He was a terrifying bear, large in stature, personality and voice, but all the while I was desperately hoping he would ruffle my hair and call me 'kiddo'. I idolised Ken and was terrified of him. I wanted to be him, and when I learnt about genetics at school, I was heartbroken to realise I couldn't have inherited his writing ability.
Even before those early Christmases, I suspect, Dad and Ken drifted apart. When I finally realised how close they'd once been, I couldn’t make it make sense - they were polar opposites, if you discounted the beards. Even there, I remember Ken’s as a wild shaggy bush while my dad's was meticulously maintained.
The stories Dad told about his and Ken's young years were hard to reconcile with my urbane, cautious and reserved father. What could possibly have persuaded my law abiding dad, who wouldn't go within metres of anything that looked like a drop, to walk home late at night across the arch of the Harbour Bridge after visiting girls on the North Shore? Nothing but the influence of Ken's large personality.
Dad also mentioned once that he'd taken blood soaked clothes to a laundry in Kings Cross and the proprietor hadn't batted an eyelid. You could never be sure if Dad was just trying to get a rise. At any rate, I didn't take the bait, so although I had every reason to believe it was true, I didn't know why.
Sometime after Ken died, a print of the film of Wake in Fright was found. All of us - my mum and dad, Ken's kids and my sister and I - turned up to the Chauvel to see it. Maybe it was there that Dad mentioned the weekend or so he spent with Ken in Broken Hill.
Dad abhorred violence, and if he explained why they decided to go roo shooting I don't remember. At any rate, they'd been told there was good shooting on a particular farm, but when they got to the farmhouse, the farmer was at the pub. Not to worry, the pub was on the farm too. Once tracked down, the farmer had just one question for them: 'Do you know what a sheep looks like?' 'Yes,' replied the two city boys. 'Well, don't shoot them.'
After an unsuccessful day, Dad and Ken returned to the pub to look for a lift back to town. A couple of locals would take them, but they still had some shooting to do. The ute only had three seats so Dad had to sit in the tray. The locals bagged animal after animal, cutting off the tails, leaving the rest of the carcass, and tossing the tails on top of those already bouncing around in the back … and Dad.
Finally, the shooters were ready to turn for home, after a drink of course. If you didn't drink with a man, there must be something wrong with you. The four of them stopped at every pub between the farm and Broken Hill, and pubs weren’t in short supply. And of course at every pub, they each shouted a round. In the wee hours of the morning the shooters dropped them on the main street. They were both well and truly worse for wear and Dad was soaked in roo blood. And for being good sports, they were handed a roo tail. Carrying it betweeen them, Dad and Ken weaved their way in the direction of Ken's lodgings.
But the local cop recognised drunk and disorderly when he saw it. For sure, they were spending the rest of the night in the lockup. He looked them up and down. 'That's a very nice roo tail you've got there, boys.' Even in their inebriated state, they knew the right answer. 'Why officer, would you like it?' And they were allowed to stumble home.
Then there was the breakfast barbecue at which all the other guests turned up with a slab of beer or a bottle of whisky and when that was finished, discussed who could get what from home, itemising their stash with ‘that'll have to be drunk, too.' One of the women had come for a couple of weeks' holiday but during the several years that had passed had never been sober enough to get herself on a train – a real life John Grant. And there might have been a story about the local cop offering directions to the two-up school, but I didn't write it down and can no longer be sure if I remember it or read it.
By the time I got around to asking for more, the fragments were mixed up and unreliable. Disease white-anted Dad's studied civilisation and grasp on the past and present. On his lucid days, he often thought we were in his childhood home, and while he seemed to recognise me, I suspect I was his sister. And that was okay. I know how much he loved her.


More about my dad - Diversity at heart of design success