The Invisible Made Visible

I've been thinking about this year and what a strange experience it has been. And one of the things that strikes me is how immensely grateful I am for the internet. Specifically, to every blogger who, whether they liked my book or not, took the time to read it and write a review. To the bloggers who hosted me for interviews, Q&As, guest posts and excerpts. To every Goodreads user who read and reviewed or rated it.

Before This Is Over was published internationally this year. I didn't expect it to be published at all - writing it was a bit of a perverse obsession, like working really, really hard at hand crafting a lottery ticket - let alone in the US and the UK as well. I keep having to stop and remind myself that wasn't an elaborate hoax, it happened. Along the way I've discovered something that I'd read about but didn't grasp until I'd lived it. A writer works on writing a book for (in my case) years and the publication process takes another few years, and finally it's out. And then it's like the book takes off on a voyage of its own and only occasionally thinks to send a postcard.

When it was published in Oz back in 2015, I got to go around to bookshops, talk to the bookshop staff, see copies on shelves, and it felt real. Twice this year my book has landed on foreign shelves and half way around the world, while I've slept, people have bought it and read it. So now I realise that unlike, say, the theatre where an audience is right there expressing a reaction, for a writer most of their audience is forever invisible to them. The book comes out and we just have to trust that someone, somewhere is silently reading it.

I'm battling with a story that I think will be good if I can ever work out how to tell it, and when it's getting the better of me and I wonder why I thought I could do this, I can tell myself that I wrote a story once before and there were people who I've never met who enjoyed it and engaged with the ideas. And I know that because they wrote about it on their blog. Nothing prepared me for how it felt to read a review and know that someone really got something I put in there even though I thought no one else would pick it up.

I've said it before but it bears saying again. I'm also grateful to MidnightSun and Anna Solding for picking it off the slush pile. To Dan Lazar and Writers House for believing it could go further. To Asya Muchnick and Little, Brown and to Marion Donaldson and Headline for bringing it to a wider world. And to them all for taking me on a wild and unexpected ride.
Posted by afterzoe at 14:17 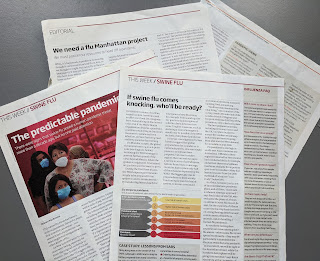